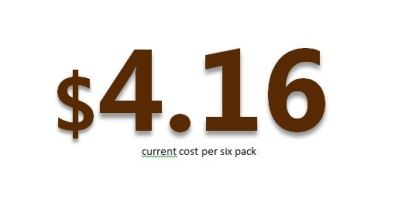 One Pot Brewing costs about $280 for the equipment, and about $20 for each batch of beer. But first I’ll tell my story: after 48 batches of high gravity beers (7.63 ABV average), mostly IPAs (over half), mostly 5 gallon, my current cost is $4.16/six pack. The formula is simple: divide the total expenses by the total number of bottles produced. That’s the price per beer. Then multiply by 6. That’s price per six pack. This number, by the way, factors in all purchases: equipment, ingredients, sugar – everything, even stuff I shouldn’t have bought. However, it also factors in a couple gift cards that I received from family members, which completely covered the cost of a few batches of beer (hey…that’s just smart, it’s called Christmas). I kept receipts for everything I bought, literally stapled into my beer journal next to the recipe. After you buy equipment, the cost starts high and naturally goes down, especially if you buy all your equipment at the beginning (I did not). Here is my batch-by-batch chronological breakdown: 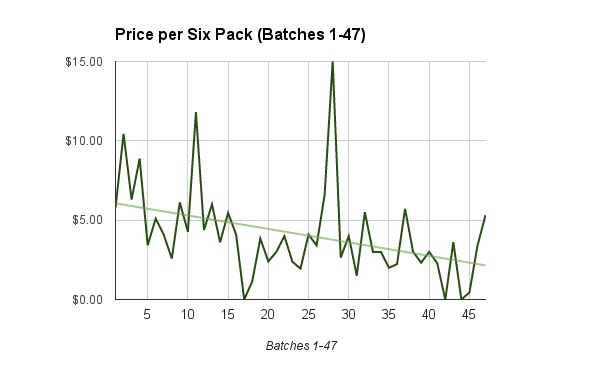 This also includes equipment costs, as I bought them. The first spike represents buying an extra bottling bucket (which I don’t need now) and extra bottles (optional). See that $15.00 spike? – that’s when I finally bought the turkey fryer kit and propane tank, which allowed me to make very cheap beer (as the trend line shows thereafter). In hindsight, if I stared brewing with the One Pot Brewing system, my price per six pack would be much lower (this is why I started this blog…for you, man).

If you learn from my mistakes, if you start where I ended, then you could easily be making $5 six packs after only 10 batches, especially if you reuse yeast occasionally. The cost will go down from there. These numbers are based on recipes that I have made: IPA, DIPA, Stout, Porter, Belgian Tripel, “Cheap Beer,” Pale Ale, and Brown. I’m assuming you want to mix it up. They range from $15 a batch to $28, which is typical (actually, I rounded up to be conservative).

See equipment page for a breakdown of cost.

One thought on “the Cost”