Although I really like the Russian Hacker Stout, which I’ve made twice now, I opted for a new recipe from Brew: the foolproof guide to making world class beer at home, by James Morton. Simplified, here’s the recipe.

My brewdays are usually weeknights after dinner, or after my wife and I put our 3-year-old to bed around 7pm. I start by connecting an RV filter to my garden hose (carbon filter). I fill up the pot and crank the heat while it’s filling. Putting the lid on speeds up things, a lot.

While waiting for the water to reach 150ish, I mill the barley very fine (all 20 pounds for this beast). It falls into a plastic bucket beneath the mill.

END_OF_DOCUMENT_TOKEN_TO_BE_REPLACED

A possible drawback to One Pot Brewing – using one vessel for the entire brewing process – is that you’re “one pot” will be tied up. You cannot brew several batches at once, or two batches in two days. That’s not entirely true and misses the point of the method. Why would you want to brew two batches in one day? –because you haven’t brewed in so long? Simply put, you will most definitely make more beer with One Pot Brewing because brewing is easier, faster, less cleanup, and more enjoyable.

Secondly, fermentation doesn’t take that long. 10 days tops? (I just brewed a Pilsner that took 10 days grain to glass). Let’s say 13 days at the most, including cold crashing. In those 10 days, I begin planning my next batch, looking at my recipes, and getting the ingredients ready. Honestly, how often does a person want to brew? More than twice a month? It’s all quite lean and has a nice flow. Homebrewers tend to brew in fits and starts, and it’s because the process takes a ton of work. One Pot Brewing is more like cooking – a constant thing. This is why I brew more than most homebrewers, why my fermentation chamber is rarely empty. 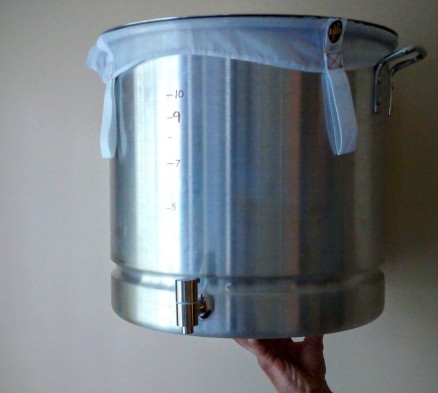 However, if you really want to brew a lot, you simply ferment in a plastic bottling bucket (which also comes with a spigot attached at the right spot, above the trub line). They are very cheap. I’ve done that a few times and it works just the same. It’s simply another vessel to clean after brewday. It’s a great feeling, however, to not have anything to clean when brewing is over – not even a pot with crap in it.

First, fill the pot with about 8 gallons of hot water:

As I’m waiting, hook the propane tank up to the burner and get all my stuff out:

Once the pot is full of 8 gallons of water, put it on the burner, crank up the heat, and put the lid on:

While waiting for this to heat up to 155F (that takes around 7 minutes), I crush my barley: END_OF_DOCUMENT_TOKEN_TO_BE_REPLACED

I recently attended a fascinating lecture from a White Labs scientist. I was drinking, so I don’t remember everything she said. But I do remember one thing very clearly: sometimes under-pitching yeast makes sense. Under-pitching, she said, creates more yeast flavors and aromas. Really? Huh. The yeast get stressed out, they work harder, and they create more flavors and aromas. Which could be good or bad. For certain styles, commercial brewers do this on purpose. Over-pitching, on the other hand, does the opposite: less flavors from the yeast, less aromas from the yeast. But it gets the job done, and faster.

Okay. Who cares? Well, some beers are defined and dominated by the yeast flavors and aromas, like the banana flavored Hefeweizen. The White Labs scientist specifically referred to Hefeweizen several times, but I assume this would apply to my beloved Belgian Tripel just as well, which also tastes like banana. Needless to say, I will not be over-pitching my Belgian Tripel from now on (which is what I was doing).

For homebrewers that reuse yeast (like me), we usually over-pitch all our beers by throwing a jar full of yeast slurry or whatever. After all, we can’t count cells. And in fact, I think this is a good practice for most beers. In fact, brulsophy has shown that it doesn’t make a different in a wheat amber ale and in a Double IPA and in a lager.

Even if you think under-pitching is a good idea, it’s not for everyone. You could run the risk of a stuck, or stalled, fermentation. That’s bad; that means your beer stopped fermenting and you need to somehow revive it. I don’t worry too much about that because I have a temperature controlled fermentation chamber, which keep the yeast maximally happy. So I don’t think they will crap out. I’m not fermenting in a cold, 50 degree basement.

Many published homebrewing books will tell you to boil for 90 minutes and chill immediately. I say boil for 30 minutes and don’t chill. There is a method to this madness. If you think about it, 30 minute boils and no chill are the lazy man’s dream team. Bitterness, we know, comes from putting hops in the hot wort for an extended period of time.  No chill extends that time. In other words, you are getting bitterness out of your hops while sitting on the couch – because the beer is still hot, very hot, hot enough to extract bitterness while it is slowly cooling down (I’ve heard 145 degrees is the cut-off point but I’m not sure). That’s why I’m trying short boil + no chill. Until proven otherwise, it’s my preferred method.

They get the most out of your bittering hops for the least amount of work. 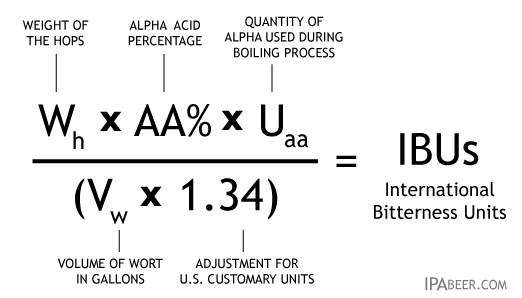 Here comes the but. It’s not for everyone, especially the scientific brewer. You have to somehow calculate and adjust for bitterness, which is tricky with no chill. For example, you throw 1 oz. of Warrior in for 30 minutes. After the boil, it stays hot for another hour. What does that mean? How much bitterness does that extract. How do you calculate and adjust your recipe? I don’t really have a clear answer yet. So far, I haven’t really worried about it. For malt forward beers, I wouldn’t worry too much; simply use the same recipe.  The Russian Imperial Stout I recently made – which had 2.5 ounces of Warrior bittering hops – came out very nice, not too bitter. I think you would be fine to keep the same, original recipe, which relies on a 60 minute boil. I think the shorter, 30 minute boil, plus the no chill, is roughly the same as a 60 minute boil. Close enough, right? END_OF_DOCUMENT_TOKEN_TO_BE_REPLACED

30 minutes 47 seconds, to be exact, including clean-up and taking these silly pictures I’m about to show you. I timed myself from the beginning to the end, just because I was curious how long it actually took.

I start by sanitizing the bottles the easy way. I throw them in the washer on a high temperature ‘sanitize’ setting and let it go. I use 22 oz bottles and use about 26 of them. This does take a little planning. Done:

(You could actually do this on a previous day. I have, although I don’t see a huge benefit. Just make sure to put plastic wrap over the bottles.) END_OF_DOCUMENT_TOKEN_TO_BE_REPLACED