Making beer is this simple. It really is.

The rest is just details.

I use one vessel – yes, just one – for all 4 steps listed above. Here’s how it works:

I fill a large pot with roughly 8 gallons of hot water (aiming for about 5 gallons of beer):

in the summer I use a garden hose or outside spigot

As I’m waiting for it to fill, I hook up propane tank to burner and get all my stuff out:

this is pretty much all my stuff for brewday

Once the pot is full of 8 gallons of water, I put it on the burner, crank up the heat, and put the lid on:

While waiting for this to heat up to 155F (takes around 7 minutes or so), I crush my barley:

if you can buy your barley pre-crushed, even better

You might be able to tell from the picture, but the barley is being crushed into a mesh nylon bag (a.k.a. the “brewbag”), which is inside of the bucket. It will make its appearance soon.

In the meantime, the water has reached about 155F, perfect for soaking the barley:

Time for the barley to be soaked in our hot water (this is called ‘mashing’). Grab the bag of barley and simply dunk:

And put the lid on.

And have a beer. I set the timer for about 30 minutes, stirring a few times in between for better efficiency.

Time’s up. I put my gloves on, take the bag out, and squeeze:

And set aside for now: 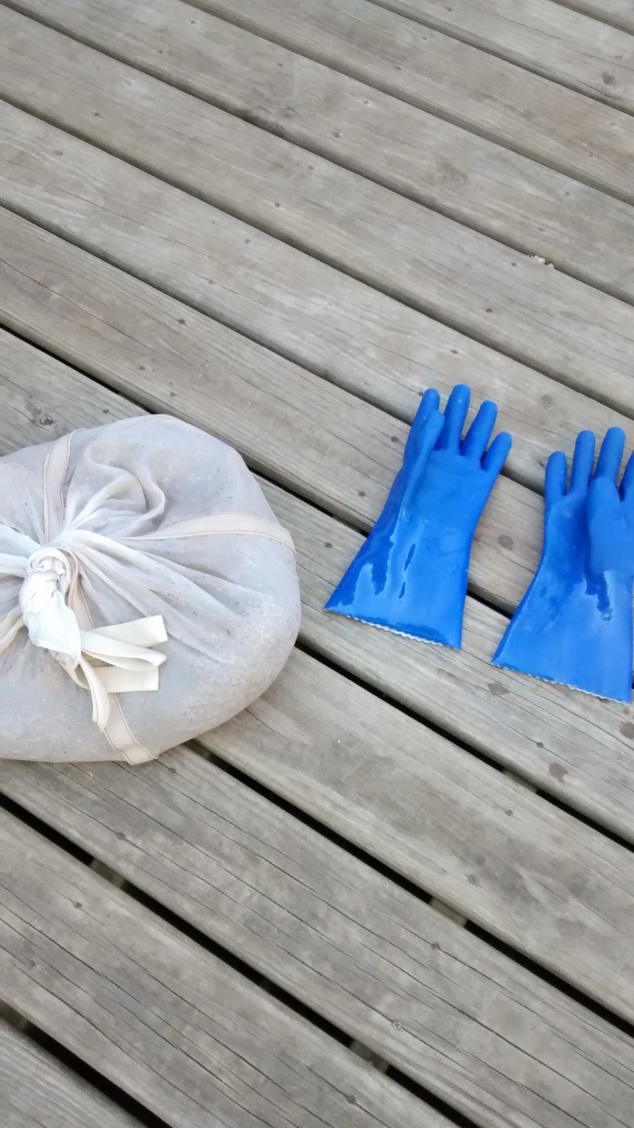 It’s time to boil. After discarding the sack of grains, I crank up the heat, put the lid on, and wait for the boil. It happens faster than you think (5-10 minutes with the lid on). While I’m waiting for the boil, I throw in my first hop addition (this is called ‘first wort’ hopping, it’s for bitterness).

The boil comes fast and furious:

When I see this, I crank the heat down significantly, until it reaches a nice, steady, rolling boil.

During the boil, I add hops according to my recipe (this was a Brown recipe that had .5 oz Magnum at the beginning and 1 oz Fuggle at the end). 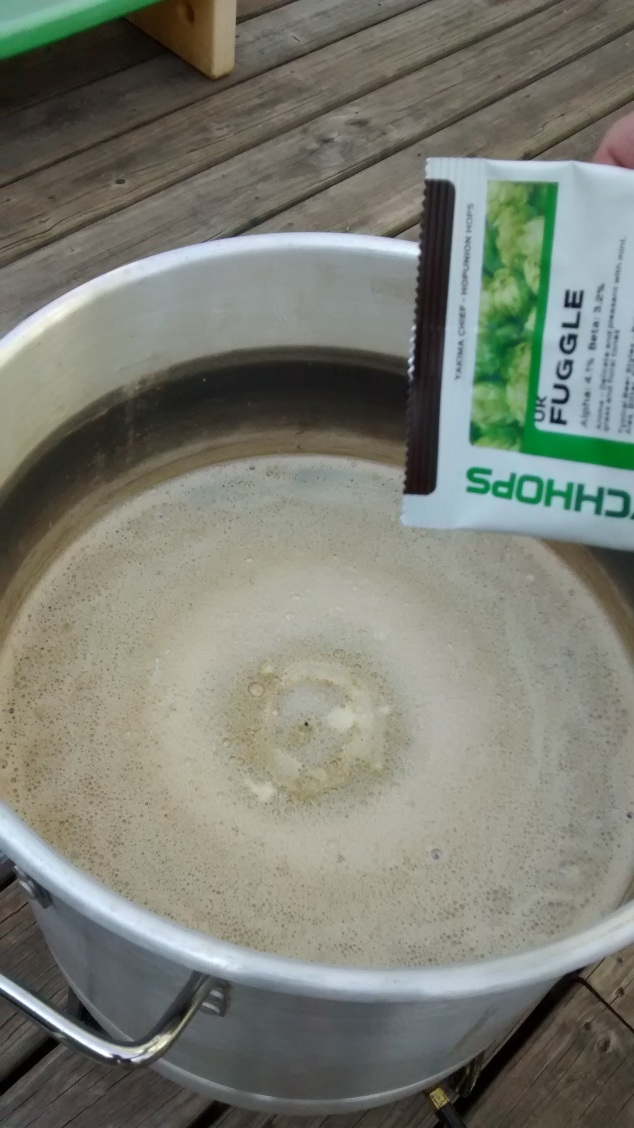 During the boil is a good time to clean up. Remember that mesh bag full of barley? Now’s a good time to throw away the barley, clean the bag, and clean the thermometer. Did you just notice how little cleaning is involved? Me too.

30 minutes are up! The boil is over, cut the heat.

Yeast likes to ferment around room temperature, so it’s not a good idea to add right after the boil (in fact, don’t do that, it will die). So, after the 30 minute boil is complete, I cut the heat, put the lid on the pot, and put in a cold fridge and forget about it for about 18 hours:

the  slow chill method; other methods are cool too

My fridge, I should mention, has a temperature controller. So I set it for 70F. The next day, when it reaches around 70F, I add the yeast:

yes, that’s me. I’m a 2 year old child. Normally I leave it in the fridge, no need to move it.

I put the lid on and forget about it for 5-7 days, which is about how long it takes for beer to ferment (use a hydrometer to be sure). After that, I like to lower the temperature for day or so (called ‘cold crashing’) and then add gelatin to the beer. This makes the beer nice and clear. However, it’s not necessary.

Bottling is very simple: put the beer in bottles, with a little sugar, and let them carbonate in the bottles for a week or so. Then drink.

First, I sanitize the bottles. I put 26 22 ounce bottles in my dishwasher, push the sanitize setting and let them go. Sometimes I do this days in advance, sometimes the day of bottling. Then, I gather up the bottles, the caps, the capper, some sugar cubes, I attach the bottling wand to the fermenter, and fill each empty bottle with 2 sugar cubes. Here’s the scene:

my bottling set up

Then I start filling bottles. I fill up one box, then cap. 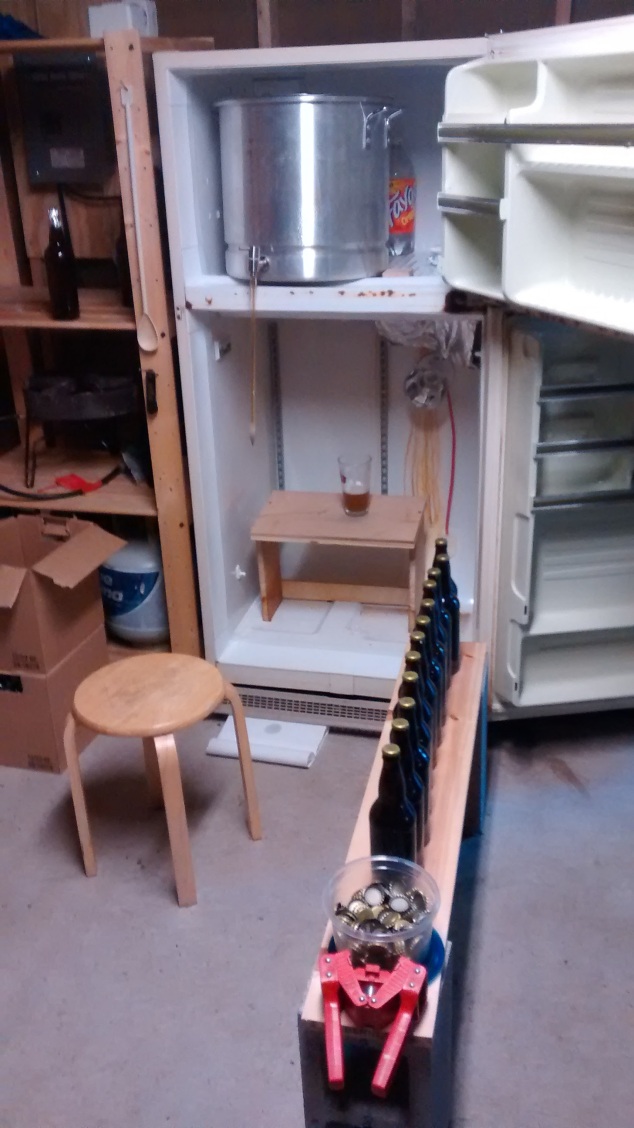 one more box to go

Repeat for the second box, cap, then put the bottles in a room temperature environment (which for me is a closet in my living room). Clean the pot, and you’re done. Congrats. Wait a week (or two), crack open your first beer, and drink it.

Making beer is not easy – it does take work – but at least I made it a lot easier.

17 thoughts on “the Process”