My previous post reported a leaky spigot after 5 days of fermentation. The fix was so simple that it proves how mechanically inept I really am. The top of the spigot needed to be tightened with an allen wrench, which I should have done when I got it. That’s all. 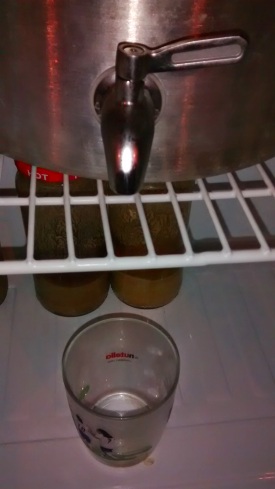 Do you see the top of the handle? That’s a hex bolt, which simply needed to be tightened, which makes the ball valve inside tighter. After I did, no more leaks.

That’s a picture of it not leaking in my cold-crashing mini-fridge. Hopefully no more problems. In other good news, as my first batch of beer carbonates fully (Spring Victory), it is tasting a lot better. Malty and bready, not so bitter.

Update: this has been fixed.

While fermenting an English IPA in my new One Pot Brewing system (this will be beer #2), I noticed this about 5 days into fermentation: 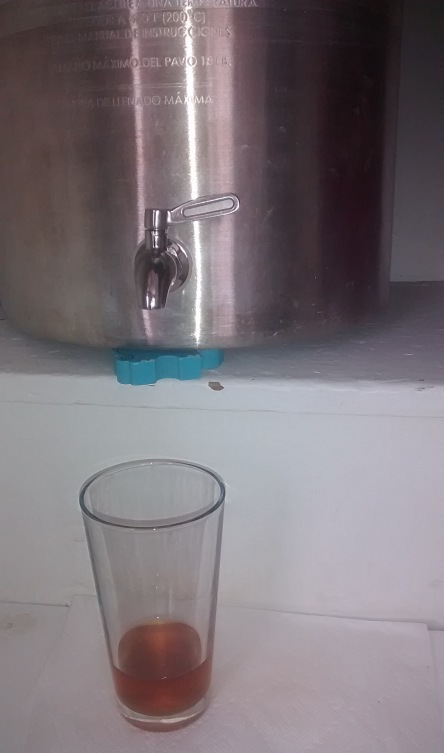 Shit! Although that’s not much wasted beer (about a cup), I consider this a failure in the system. I talk a big game, but One Pot Brewing is an experiment; therefore, I am fully comfortable with failure. In full disclosure, I noticed a little bit of leaking in my first batch, while heating up the mash water. Oddly enough, it stopped after 10 minutes, and never started again. Now it started again.

I’m hoping that this particular spigot is faulty. It has nothing to do with the seal, I know that. I did notice that the lever is a big loose. Serendipitously, amazon accidentally shipped two spigots instead of one, so I’m going to try the other one. If that leaks, I have two options: get a better spigot, or deal with it by placing a glass under my fermenter. And yes, that’s a little rhino underneath the fermenter (he forces the nasty trub away from the spigot, to the back part of the fermenter, probably not necessary).

As of yesterday, I moved the beer into a mini-fridge to cold crash. I wonder if it will stop leaking?

I’ve been doing this for a while now and love it. Convenient and effective. My dishwasher has a “Sanitize” setting, which not only cleans the bottles, but gets them extremely hot. If you have a dishwasher with this setting, give it a try. No more StarSan, no more silly bottle trees or putting bottles in your disgusting bathtub. No more making a huge mess.

The only drawback, I suppose, is that you have to plan a little bit in advance, but that’s no different than other bottling techniques. I know this sounds silly, but you have to do all the dishes and make sure the dishwasher is empty. Sanitizing takes about 2 hours, so that takes a little planning as well. But that’s two hours of you doing none of the work. It does all the work for you.

My dishwasher (normal size) holds about 26 220z bottles, more than I need. I use 25 22oz bottles for a 5 gallon batch (that amounts to roughly 44-50 12oz beers). If I bottle after work, I usually put the bottles in the dishwasher before work. Otherwise, I put them in a few hours before bottling. 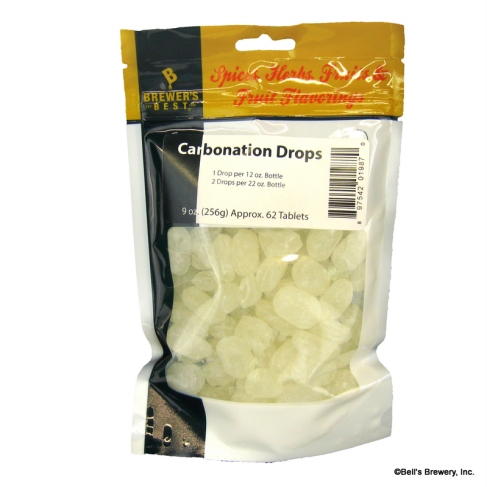 Bottling used to be the worst thing about brewing; now it’s not. Carbonation Drops are essentially little sugar balls that you add directly to bottles on bottling day (video).  After using them on several batches, I am very happy with how they perform. But, you ask, why in the hell would anyone want to use them? Considering the price of these little fuckers (about $4.50 per batch of beer, much higher than the price of corn sugar obviously), that’s an excellent question. I better have damn good reasons. I do.

First, they allow my One Pot Brewing system to exist (otherwise, it would be two pots), a system that has various other benefits. If this was one defect of the system, I would swallow it. Second, Carb Drops work well. That is, they carbonate my 22 oz bottles exactly how I want them to be. You never have to calculate how much corn sugar to use (which I would fuck up in the past); you never get fizzing or over-carbonated beer. Third, changing your batch size is no problem. Whether I do a 5 gallon, 4 gallon, or 3 gallon batch, carbonating is still the same – drop two Carb Drops in 22 oz bottle, and fill. I don’t know about you, but I never end up with exactly the same volume of beer every single time. Fourth, they make bottling day a lot faster and a lot simpler. This is most important. Previously, I would have to (1) calculate amount of corn sugar (2) boil in water (3) let cool (4) transfer beer to bottling bucket (5) oh wait, first sanitize the bottling bucket and the god damn tubing (oh, don’t get me started on tubing and how ridiculous that is (6) add corn sugar solution to beer and stir (7) bottle. Now, the steps are (1) add Carb Drops to bottles, which takes about 3 minutes and (2) bottle.

Why don’t I stop beating around the bush and start Kegging already?
Money. Equipment. Tubing (I hate cleaning tubes). And know-how (I’m not very mechanically inclined to build keezer, even if I wanted to). Also, people like to say that kegging is faster than carbonating in bottles, but it seems like only a day or two faster. Don’t get me wrong: if someone bought me a keg, with lines, and CO2 tank, and kegerator to put it in – hell yeah I would love it.

You cannot control carbonation levels with Carp Drops!
First, as a homebrewer, I don’t care that much. But if I did – for example, if I wanted my Belgian Quad to be highly carbonated and true to style – then I could use “Carbonation Tabs” (think Carb Drops but smaller; smaller so you can add more, get it?). Second, I’ve had more than one “kegged” beer that was all fucked up, carbonation wise, so kegging has it’s own problems.

What are the most expensive ingredients in making beer? Hops and yeast. A simple dry packet of yeast is only $3, which isn’t so bad (for example, the classic Safale-05), but a special vial of yeast is around $6 (for example, Belgian Trappist). Growing hops and reusing yeast mitigate those costs tremendously. I especially like to harvest and reuse those special yeasts (Trappist, Scottish, San Diego Super), which I keep in my fridge for several months and reuse them several times. “Harvest” is just a fancy word for getting yeast from your fermenter into a jar.

Harvesting yeast, like most things in this beer-making hobby, can be as complex or simple as you want. As you probably guessed, I do it the simple way.

So, when the next brewday comes along, I simply take the jar of yeast out, shake it up, and pitch as much as I want (I eye-ball it…the worst that could happen is over-pitch, who cares).

Based on two experiments done by brulosophy.com, I decided to mash and boil for 30 minutes each (instead of the standard 60). On top of that, I tried my new One Pot Brewing system for the first time. Total time from start to finish: 1:47! Compare this to traditional all-grain systems, which can range from 5 to 8 hours. When I looked at my stop watch, I couldn’t believe it. This, by the way, is total time–getting my brewing equipment out, filling my pot with mash water, cleaning (the little cleaning I have to do) – everything.

Here’s a video of the process (ignore the part that says 60 minute mash and 60 minute boil…that’s a lie for instructional purposes):

How I saved time

Okay, but the beer tastes like shit, right?
I will report back in about a week or so. Tasting it yesterday from the fermenter, it tastes exactly as expected (it’s a very simple recipe highlighting some Victory malt). I will cold crash today, add gelatin tomorrow, bottle in a few days. If I turns out, you bet your ass I’m trying this out again on a Double IPA.

this is the bag I use. 5 gal. paint strainer from Lowes.

One of the benefits of soaking your barley in a mesh bag (Brew in a Bag), as opposed to some sort of two (or three) vessel system, is that you never have to worry about a “stuck sparge,” which is what happens when a traditional all-grain system gets clogged during the process where grains are separated from the liquid (lauter, sparge). In BIAB, I simply lift the bag out of the pot: done. Sparging is optional.

Now, stuck sparging probably rarely happens – and there are ways to prevent it, like using rice hulls – but sometimes it does happen. I know because people have told me. For beginning brewers: you’ve been warned.

I’m not saying my way is better. Wait a minute, yes I am! Of course I think my way is better. Otherwise I wouldn’t do it. It all depends on what we mean by ‘better.’ Traditional all-grain brewers would say stuck sparging rarely happens, is preventable, and worth the risk of producing the best quality of beer possible. I agree with that. I do not claim to produce the best possible quality beer with my system. I simply point out the huge practical costs involved in doing that. And now I’ve added one more minor practical concern: stuck sparge and buying rice hulls for some batches. 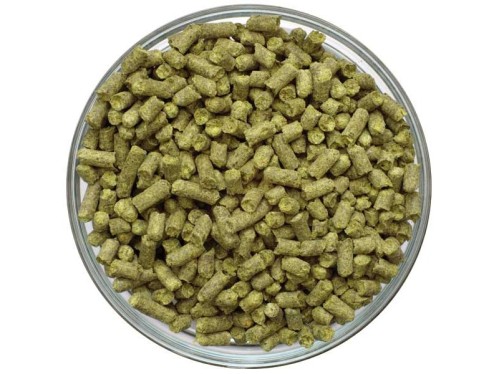 Instead of adding hops when the boil starts (60 minute), add them before the boil starts but after the mash ends. Considering the benefits, it’s really a no-brainer for me. For all of my beers, I do First Wort Hopping (FWH) instead of 60 minute hopping. After soaking the grains in hot water (mash), I take the bag of grain out and place them on a strainer above the kettle. I turn the heat on, throw the hops in, and wait for the boil. It’s easier, more convenient, more efficient (think: IBUs), and less chance of a boil-over.

Cons
–  cannot think of any
–  still can’t
–  well….okay, FWH might be harder to calculate than 60 minute hops (on some brewdays, it might take longer to get a boil, which might affect IBUs). For a brewer who was absolutely obsessed with calculating IBUs exactly, or replicating a recipe exactly, I could see them choosing 60 minute hops instead. I think the difference would be imperceptible. 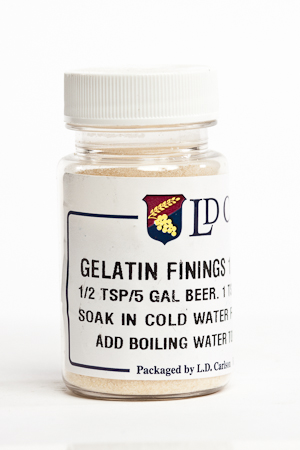 This is something I’m experimenting with now. It’s low cost, easy to use, and might just make make my beer a little more clear (instead of cloudy with a chance of hop balls). I’m exaggerating. Really, you don’t need gelatin to make great tasting, relatively clear beer (the most obvious way to have a clear beer is to pour it gently into the glass, leaving the sediment at the bottom of the bottle; something I’ve been doing from day one). It doesn’t transport well, but it works.

How To
After the beer is done fermenting, add 1/2 teaspoon into some cold water. Wait an hour. Then, the instructions say to add boiling water. This will dissolve the particles into the water. But, what I do is this: microwave for 10 seconds, stir; microwave for 10 more second, stir; repeat a few times until it’s dissolved (not cloudy).

As of today, I’m trying this on a DIPA. It fermented for 6 days, then I dry hopped and put in cold basement. A day later, I added the gelatin. I plan on bottling in about 4 days.