When it comes to recipes, I’m only comfortable giving advice when it comes to IPAs. After brewing about 30 batches of them, reading the IPA book by Mitch Steele, and looking at tons of commercial examples, I’ve learned a few things. In a word, keep the grain bill simple and dry hop a lot. Dry hop more than you think (like 5 or 6 ounces). 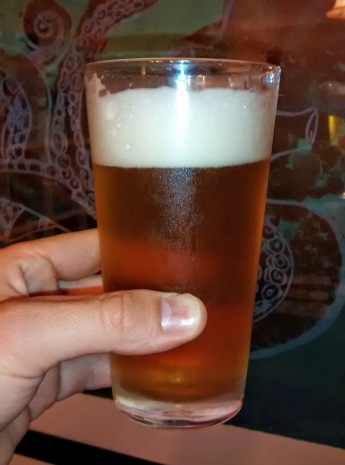 Barley
Although I have used 100% two-row barley on several IPAs with success, I don’t recommend it. For Double IPAs you can, but regular IPAs need a slightly better malt backbone, complexity. Try a pound of Munich, or Vienna, or Biscuit. I personally don’t like Caramel Crystal malt in an IPA, although most commercial examples have it; it’s too sweet and detracts from the hops. I like a crisp, bready backbone instead.

Hops
I like to add one ounce of a really bitter hop while I’m waiting for the boil (called “First Wort Hopping”). Like Warrior or Columbus. That takes care of all the bitterness I need for the beer. Many times, after that, I won’t add any more hops until after fermentation (called “dry hopping”). Dry hopping is magic. Some people say that adding hops after the boil (“flame out”) is similar to dry hopping; I disagree. Anyway, with dry hopping, 5 ounces is about the perfect amount (after all, you want it to be affordable too), with 3 ounces on the low end and 8 ounces on the high end. You only need to dry hop for a day or two, and dump them in all at once (no need to stagger the additions). Pellets are easier to work with. No need to use a “hop bag” or anything weird like that. If you want a clear beer, use gelatin and cold crash.

For your first IPA, only use Centenial hops. Try one once for bittering, and 5 ounces dry hop. You will be amazed at how good it is. That’s your baseline. Next batch, introduce some Cascade, or Simcoe, or Columbus, or Amarillo. Any combination will be good. Mosaic is very powerful and can dominate; use sparingly. Citra is also popular.

Yeast
Safale-05 is my favorite. It’s clean, lets the hops shine, ferments well, you don’t need to use a starter, and it’s cheap. Nuff said.

That’s pretty much it folks! See some sample recipes here.

2 thoughts on “How to Make a Really Good IPA”